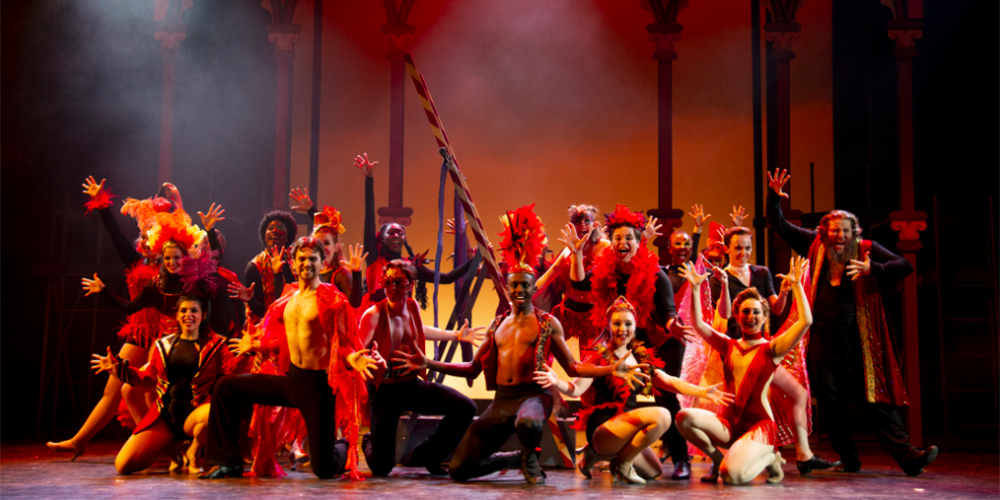 Jacquelyn Whiteside is a senior majoring in drama, minoring in musical and technical theatre. Along with her research mentor Deborah Bell from the Department of Theatre, Jacquelyn designed the costumes for the UNCG mainstage theatre production of Pippin.

The goal of this project was designing costumes for the UNCG mainstage theatre production of Pippin, a musical with an emphasis on an arduous dance style created by the renowned choreographer and director, Bob Fosse. The original Broadway production was notable for Fosse’s choreography and direction and praised for its nuanced approach to the search for acquiring wisdom and purpose.

This project required careful organization and visualization of character groupings, husbandry of resources and budgets, mastery of a range of technical skills involving costume construction, and an abundance of research.

With the incorporation of Bob Fosse’s distinct dance style, it was imperative to design the costumes to allow proper flexibility for the actors. Extensive research on Bob Fosse was needed to communicate his distinctive silhouette and style effectively. During the production period, close collaboration with the director, design team, and costume studio was just as critical to the development and proper realization of costumes. The costumes’ extensive organization was achieved by pulling from stock, purchasing from online resources, and building designated builds – pieces that the costume studio has decided to create from scratch, rather than using an item of clothing that’s already been made.

One specific method that comes to mind is how we created the armor pieces the script required. Near the beginning of the musical, Pippin undergoes a war with his father and fellow soldiers. Since this musical needed heavy dancing, we had to create a realistic looking armor that was also flexible enough for the dancers to execute their numbers properly. We utilized Fosshape, a flexible material that feels and looks very similar to synthetic felt, but when heat is applied, the material can be shaped and molded into your desired look. Cording and EVA foam helped add dimension and detail to the Fosshape armor pieces. Two to three layers of Sculpt or Coat, paired with wet paper towel strips, were applied to the pieces to smooth the shape and prepare the surface for paint. This step is very similar to Papier-mâché. We painted each armor piece in various shades of silver, gold, and bronze to achieve a realistic metal appearance. The theatre students in the costume crafts armor class made these fantastic pieces come to life, and I’m so grateful for the diligence and creativity they put into fabricating these pieces.

The design process is a never-ending cycle of learning and discovery. I read the script over a hundred times, and each time I would find something new and intriguing that I hadn’t seen in the previous readthrough.

During the rehearsal process, the results of my work began to take shape. For months we had design and production meetings while collecting and building costumes, which led its way up to the anticipated opening night. The first dress rehearsal displayed the first significant result of everything coming together. Seeing all of the costumes on the stage working their magic in real time allowed me to see if the work and research I had done for the past six months worked not just in theory, but also in practice. Thankfully, everything ran smoothly with very few issues, and opening night was a success. As I recall, box office sales were also a success with multiple sold-out performances.

How I got involved.

About a year before designing for Pippin, I took an introductory costume design course, which I followed with a costume rendering styles course in the spring semester of my junior year. I took these courses to see if I would enjoy costume design as a potential career path for myself – I originally wanted to pursue acting in musical theatre. Shortly after that, I received an email from my mentor, offering me the position of costume designer for Pippin. The thought of designing for any UNCG production had never crossed my mind, partially because I didn’t think I’d be qualified for the project. That being said, it was overwhelming but also extremely humbling.

During the production process, I received tremendous support from my mentor, the costume studio supervisor, and my design assistant, who was also a professor in the department at the time. These three ladies were my rock and are such gems to have here at UNCG. They were so encouraging, inspiring, and I couldn’t have done this without them. I am so grateful to have been given this wonderful opportunity, and I thank my design mentor, who recognized something in me that I couldn’t see in myself at the time.

This project expanded my knowledge of the costume design process, historical aspects of musical theatre, different sewing techniques, and organizational skills. The most significant impact for myself was being able to put costume design theories learned in class into practice on a real-world scale.

Laying out ideas and rules in theory is a task in and of itself, but having the ability to fully execute those theories is another. I also learned how to effectively communicate ideas to an entire design team. I’ve learned that attentive collaboration, extensive communication, and a bit of compromise are crucial aspects in designing.

The substantial amount I have learned during my time on this project will stay rooted in me as I move on to future projects in my career. I am currently designing for a short film and can certainly say all that I learned from the Pippin production process has influenced how I’ve approached this next project.

Before COVID-19 shut the world down this year, I was fortunate enough to travel to Louisville, Kentucky, alongside some fantastic theatre artists, to compete in the Southeastern Theatre Conference (SETC) design competition. Every year theatre artists within this district travel and partake in various workshops, career fairs, and the design competition at this conference. It is a fantastic way to meet and connect with colleagues in the industry.

As for the design competition, hundreds of designers and technicians in each field (i.e., lighting, scenery, costumes, props) display their work on production within the past year for adjudication from reputable theatre artists. I was fortunate enough to present my designs and final production photos of the fully realized costumes for Pippin in the design competition. I received outstanding and helpful feedback, which ultimately has allowed me to grow as a designer. I also exhibited my work and research at the USITT Design Expo in September 2019 and virtually at the Thomas Undergraduate Research and Creativity Expo in late April 2020.

The most memorable difficulty would have to be the one costume we had to completely rebuild and recreate in less than a day. I had chosen a knit fabric to build a dress for one of the characters, and throughout the production process, we had many struggles figuring out how to make it work. This specific fabric stretched beyond measure no matter what we did and consistently gave us hardship in construction, but it was built in time for the first dress rehearsal. At the end of the dress rehearsal, the director insisted on cutting the dress and finding an alternate option because the actor’s mobility was hindered due to its floppiness, and it didn’t seem to fit in with the look of everyone else’s costumes. That being said, the following day my wonderful costume design assistant and incredible costume studio supervisor rebuilt the entire dress out of an existing dress from our costume storage stock. The actress was able to wear it that night at the second dress rehearsal. This was definitely a learning experience for everyone in the process, and I will think twice before choosing another knit fabric.

The project did change over the course of the design process. The original research focused on medieval motifs influenced by Grotowski’s methods and theories – he was most notably known for the idea of “poor man’s theatre.” As the design process evolved and ideas changed, research became more focused on Bob Fosse’s dance style and the director’s vision to pay homage to his legacy through the production.

This has been one of the most hands-on, educational experiences I have had here at UNCG. Though I’ve just started in the world of costume design, the amount I learned through the entire production process at the undergraduate level is remarkable. This project is a steppingstone to a fantastic career path and has definitely benefited me as an individual and as a professional.

From the individual side, I have learned that making mistakes is not the end of the world; rather, it is where learning can come in. I think allowing myself to accept that has made me a better scholar and person. For the professional side, I am currently designing for a short film and have implemented the organization and communication techniques I learned from this project.

The most surprising thing about this experience is the amount of positive feedback received and how this project seems to still somehow remain part of my life. I have been blessed with an abundance of opportunities to exhibit this project, and I never thought a year later I would writing a blog feature about Pippin, yet here we are. It is so humbling, and I am always surprised by this project’s longevity.

The other surprising thing is how much I had to trust and rely on the crew. I am the type of person who will do everything on my own, not because I don’t trust people to help, but only because it’s how I have always functioned. Having an entire costume crew helping with the workload was something I had never experienced before. Oftentimes my costume studio supervisor would have to remind me that I could give a task to someone else rather than doing everything on my own. It took some adjusting, and even now I am still adjusting.

Don’t be afraid to get yourself out there, try new things that excite you, and don’t be afraid to fail. If you don’t fail, how will you learn? Keep your mind open to different things within your field, learn as much as you can from your professors, and show kindness in the face of adversity.