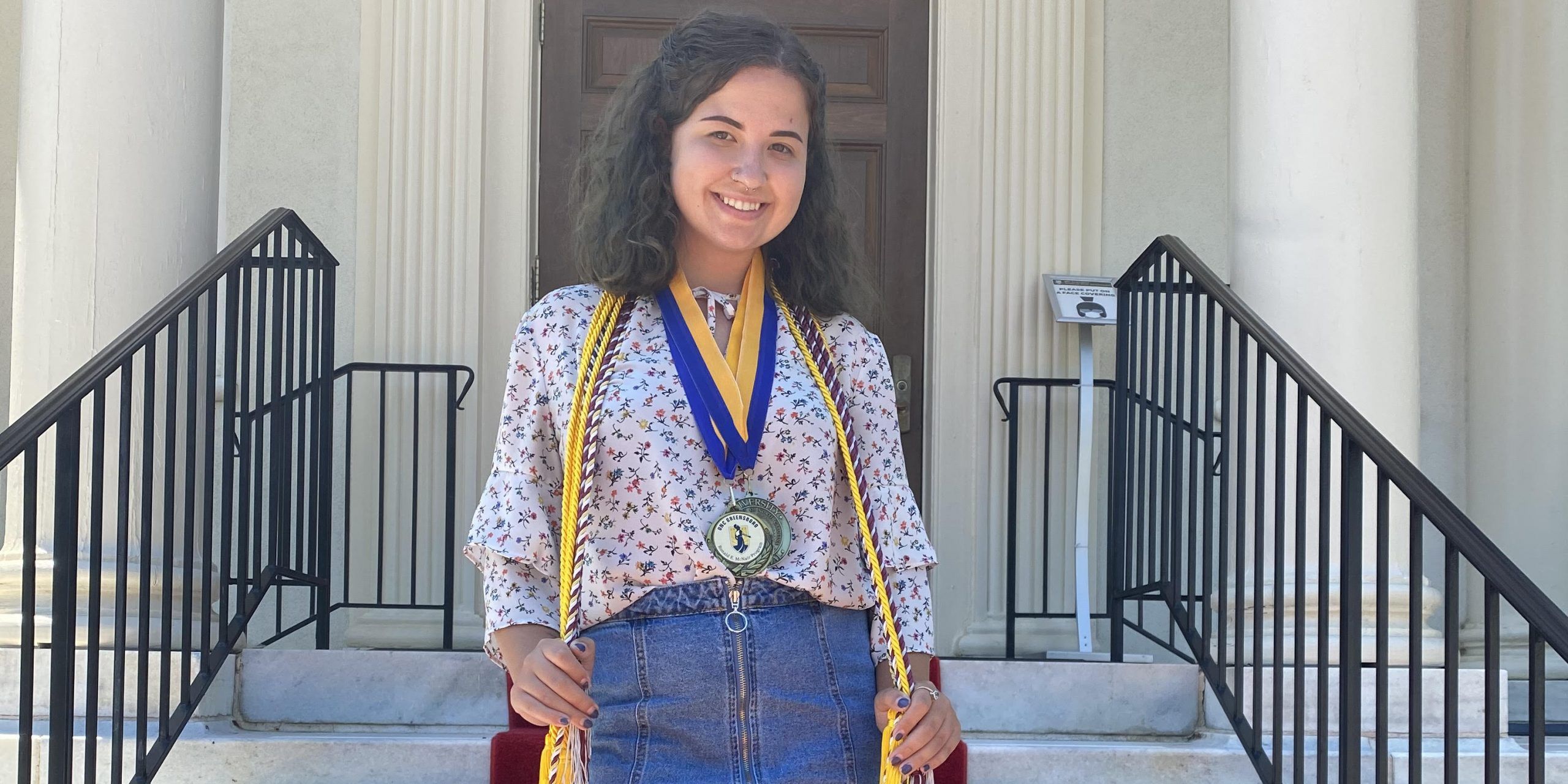 We interviewed Laci Gray, a graduating senior who majored in psychology with minors in Spanish and creative writing. Along with her research mentors Dr. Rosemery Nelson-Gray and Dr. Peter Delaney, Laci examined the cognitive symptoms believed to be associated with borderline personality disorder. Interview conducted in May 2021.

The title of my project is “Memory and Emotions.” Basically, I was trying to address clinical psychology questions using cognitive psychology techniques. I wanted to get at the cognitive symptoms of borderline personality disorder (BPD) because we don’t know a whole lot about that. The research is very scarce. I wanted to know if people with borderline personality disorder remembered or forgot information differently than someone without the disorder.

Usually people with this disorder will perceive themselves or other people or the world around them in a negative light. So I thought that maybe they would also remember things in a negative light. More specifically, I hypothesized that if I presented them with information that was relevant to their disorder, like the word “abandon” or the word “rejection” – because those are symptoms of the disorder, to fear rejection or abandonment – I predicted that they would have a difficult time forgetting those words. As a control, I also included general negative words, not specific to borderline personality disorder. And that would tell us more about the cognitive symptoms of the disorder.

Not what she thought

My research was actually a replication study, meaning that there were two previous studies that tried to do what I was also trying to do, and they found conflicting results. One found that people with BPD had difficulties forgetting salient words, while the other found that they didn’t have trouble forgetting but did experience enhanced remembering of salient words. I did my study, and what I found was that borderline personality disorder basically had no effect on how people remembered or forgot these words that were relevant to the disorder, and that was directly contradicting the previous studies. So that was a pretty big finding for us, because either I’m wrong – and I don’t think that I was, I think my methods were very clear cut – or the other possibility is that they were wrong. I think that my results point toward the previous studies not using the cleanest methodologies that they could, and so they got skewed results.

The root of the problem

The fact that my study failed to replicate the previous studies is very important. We were previously kind of going in a direction that wasn’t super accurate with borderline personality disorder. We thought there were cognitive symptoms that I think don’t exist now that I have done my study. So I think now we can, as scientists in the field of borderline personality disorder, we can focus more of our time and energy doing research on the emotional symptoms.

At first I was not very excited to do a replication study. I think that’s sort of the root of the problem. Like, for me personally, I wanted to create something no one’s ever done before. And I wanted it to be original and exciting. But there is a need for replication studies for that exact reason, because if we don’t replicate them, then we can just do whatever we want, and no one will question it because it’s science. But science can be flawed. So yeah, I think I’ve realized the importance of replication studies by doing this study.

I actually did a previous study that was like a pilot. It was my first go at researching the same question. I did it for the McNair Scholar Program here at UNCG, so I presented those results at the McNair Expo at the end of the summer of 2020. I presented these latest results at the Southeastern Psychological Association, at Carolina’s Psychology Conference, and then, of course, at the recent Thomas Undergraduate Research and Creativity Expo at UNCG. We plan on publishing what I found also.

I would also like to give a huge shout out to the McNair Program. Without them, I would not be where I am now. They gave me so many tools to further my research, to further my knowledge about research, and the Honors College furthered my knowledge. And my faculty advisors, of course. Without all of those people, without that support system, I would not even be doing research, and the answers that I found wouldn’t exist. And I think those answers are important.

Research in the time of COVID

I think the biggest difficulty was probably learning how to use the software, not just for analyzing the data but doing everything online because of COVID. So, creating the study online using Qualtrics – I’d never used Qualtrics before, it’s a survey website – and then analyzing the data was hard. I had to learn how to use SPSS, the data analysis software that we use in the Psychology Department. That was very difficult, and I struggled all the way up until the end, but my faculty advisors helped me along the way.

Doing a study online presented other problems. We showed participants a set of words on a screen and we asked them to remember some of the words and to forget some of the words. With a memory task, I feel like a lot of people want to do well so they would take pictures, they would write words down, when they were only supposed to use their memory of the words.. It was only a minority of my participants that did that, but it grants them the freedom to do that when they’re sitting in their room rather than sitting in the lab. Doing a study online is always risky because people can cheat, people can just not pay attention, and then you have data that isn’t really useful to you because it’s not very accurate. So that was a bit difficult, but we overcame, and we got the results.

I think the most interesting thing to me was the cognitive aspect, because I was interested in clinical psychology when I came into college. I’m in a clinical psychology lab working with borderline personality disorder. So just being able to feel around in the cognitive psychology world with the memory task and all that was really interesting to me, because a lot of the people in my lab and in the clinical labs, they don’t really do that. We mainly give people questionnaires and sometimes in the BPD lab we will try to manipulate their current mood with some sort of frustrating task, and although that is important and necessary, that’s pretty much it. But the memory task was experimental in my study, which was pretty cool.

To anyone who’s thinking of doing research, I would recommend thinking outside of the box. You don’t have to do what other people in your lab are doing or even what your faculty mentor is doing. I sort of forced Dr. Nelson-Gray and Dr. Delaney to come together because I wanted to do this. And, honestly, they were both equally important to this project, because of the cognitive and the clinical aspects, it was like 50/50. The clinical is Dr. Nelson-Gray’s expertise, the cognitive is Dr. Delaney’s expertise.

Seeing herself as a scientist

I was very surprised that the previous studies failed to replicate. That was partly because I guess in my eyes, those researchers were professionals and adults, and I was just a little undergraduate doing my honors thesis. I don’t want to say I expected them to do it the right way because I don’t know if there’s a right way to do science, but I expected them to do it in a way that would produce results that were accurate. So then when I didn’t find their results, I found pretty much the opposite of their results – that borderline had nothing to do with the memory task we were using – that was very surprising.

It also made me feel important, like I’m putting something into the world that matters. It kind of made me feel like a scientist, which is really weird to say. I never would have imagined myself to be a scientist when I was in high school, applying to colleges, so that was kind of surprising. I expected to just do my research to get the honors requirement for my degree, but I ended up being very proud of what I was doing and being very proud of myself for doing all the hard work that it took.

Preparing for the future

I think doing research as an undergraduate has been wildly beneficial to me, honestly. I didn’t come into college thinking that I would do research. I didn’t even know that was a possibility for me. Now that I’ve sort of dipped my toes in research, number one, I feel like I’ve built up my CV so much to apply to graduate schools, to get a job in the field of psychology. Research is super important for that as an undergraduate. Also, I’ve learned a lot, like I’ve learned how to be patient. Research takes so much time. I’ve learned perseverance. It’s very hard, and it’s very defeating sometimes if you don’t get the results you want or if you have to throw out a certain number of participants. It can feel kind of disappointing, but overcoming those obstacles and just persevering, it’s very rewarding in the end. And also I just feel like I’m putting something into the world that is of value, and that’s a really good feeling.

I would definitely say just keep going. It’s very hard if you’re doing research, but don’t let it intimidate you. Just recognize that you’re going to be doing a lot of hard work, but it is all worth it in the end, and don’t let the obstacle stop you from making it to the finish line. Also, just ask questions. If research already exists but you find that there’s a question that you have that hasn’t been addressed, ask those questions and keep going until you find the answers. If research was easy, we would know everything in the world and we wouldn’t have to keep doing it, but there are so many things that we don’t know. And no matter how insignificant you feel that your question is, someone else might have the same question, and they need to be answered to advance science.