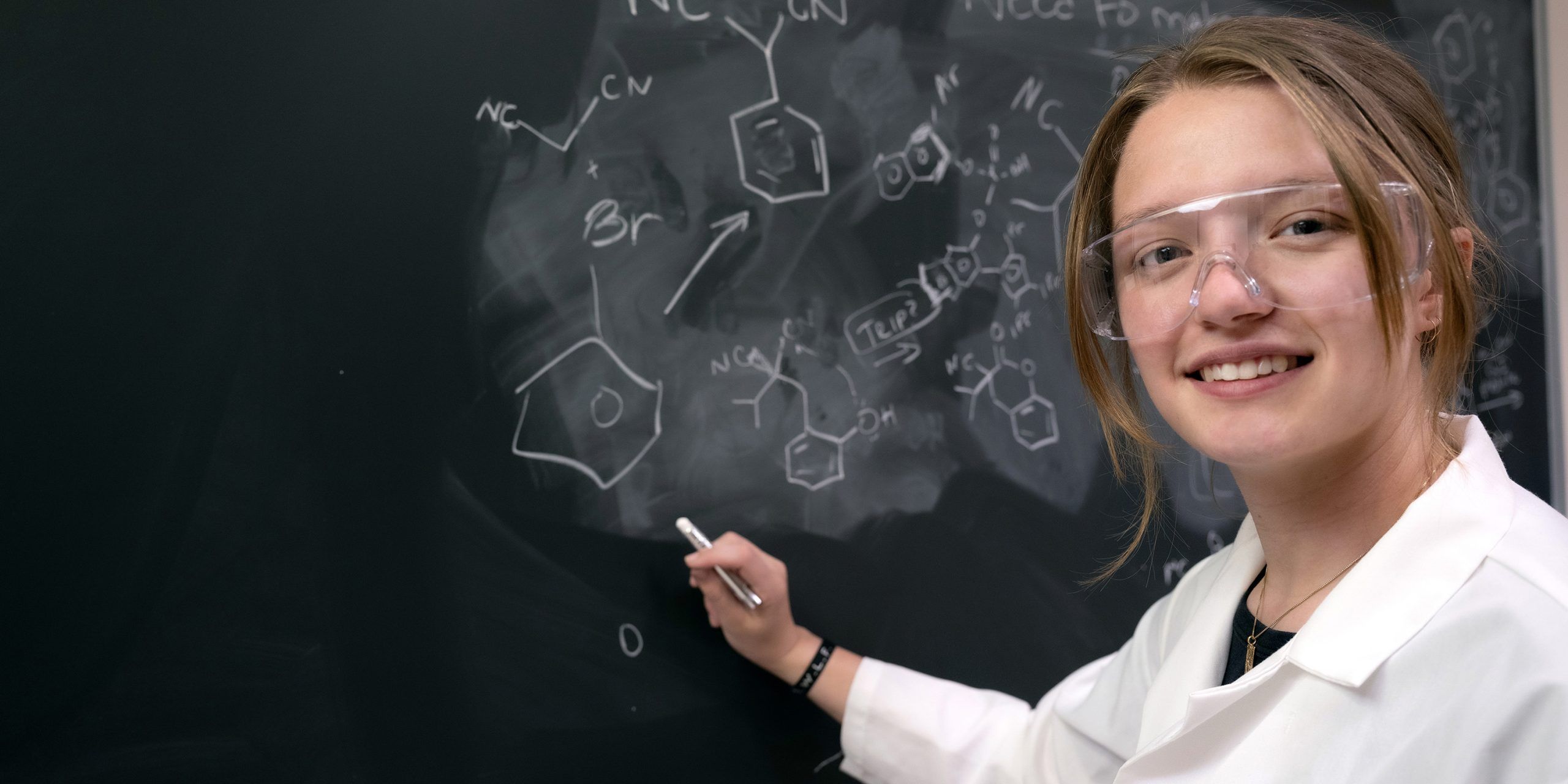 Kala Youngblood comes from a small, rural Virginia town. She describes it as a beautiful area, but not one where many people were exposed to or interested in her biggest passion: science.

As a middle-schooler, she attended a monthly Women in Technology and Science program at a nearby university. “That was really encouraging to me because it wasn’t the stuff I was seeing on TV or what the media was portraying,” recalls Youngblood.

“I realized: this is what a scientist is, and I can be that person.”

Several years of hard work later, she has received a Goldwater Scholarship – one of the oldest and most prestigious STEM scholarships in the United States. Youngblood is the first Goldwater Scholar at UNCG in almost a decade.

Scholars are selected for their commitment to a STEM research career, display of intellectual intensity, and potential for making a significant contribution in their future field.

For Youngblood, that field is chemistry. She’s currently exploring chemical synthesis as an undergraduate researcher in the lab of organic chemist Dr. Kimberly Petersen.

She was inspired to do so in a class taught by Petersen. There she learned the story of the drug thalidomide, sold as an anti-nausea drug for pregnant women in the 1950s. After a decade of use, the medical community discovered the medication caused severe birth defects and death in infants.

The problem, Youngblood explains, was molecular asymmetry. The drug was composed of two types of molecules that were mirror images of each other – alike but subtly different. “Like our hands.” They might seem the same, but if you put your right hand over your left, you can see their structures are oriented differently. “One version of the molecule was an effective drug, the other caused birth defects.”

In Petersen’s lab, Youngblood is now looking at asymmetry in lactones, chemical compounds commonly used in antibiotics, anti-cancer drugs, and other medicines. While there are already ways to make lactones in harsh conditions – such as reactions requiring dangerous hydrogen chloride gas – Youngblood is working on methodologies to create them in milder conditions, which also allow for the development of more complex molecules. The work will hopefully contribute to future safe and effective medications.

When she explains her work to her family, Youngblood draws on their interests. Her father knows about car repair, and to him she explains that medicinal compounds, like cars, are made up of many pieces – she’s not building the whole car but finding a way to make a better wheel.

“You can’t build a car by putting two pieces together and be done. You have these smaller pieces you put together, and you end up with a car. So, in the lab, we’re working on these small pieces that other people could put together to make a bigger molecule. We’re discovering how to get the version we need that’s not going to cause issues in the body and figuring out better ways to access the correct version.”

As a MARC fellow, Youngblood receives support for her research and access to professional development opportunities, such as presenting at the Annual Biomedical Research Conference for Minority Students – where she received the Award for Outstanding Poster Presentation.

She also participates in the Spartans for Science Policy Club, a student group that works to increase science communication skills among their members, make science more accessible, and build trust between scientists and non-scientists through outreach.

This summer she completed an externship at Cal Tech through the MARC program. Her research project focused on phenazines, organic compounds that occur naturally in plant root systems and can protect crops
from disease.

“I grew up surrounded by farms. So, I’ve seen the struggle of farmers and what it’s like to have crops fail, and I’m really passionate about food security,” she says. “Synthetic applications aren’t just for medicine – they can also be used in farming.”

Youngblood hopes someday to have her own research lab, where she can also mentor students. “The reason I’m here is because I had mentors – from my high school chemistry teacher to the MARC U-STAR faculty – who believed in me and told me that I could do those things.”

She currently volunteers at Hope Academy in Greensboro, tutoring in an afterschool science program.

“It’s different, but it reminds me of where I grew up,” she says. “There are so many beautiful kids who are so smart and so intelligent but just need a push, like: ‘you are a scientist, go do this.’”