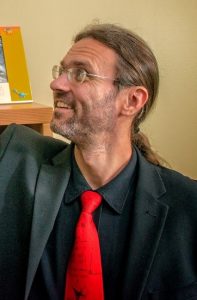 In 2014, the UNCG Undergraduate Research, Scholarship and Creativity Office (URSCO) established the Thomas Undergraduate Research Mentor Award to recognize faculty members who have been engaging and exceptional mentors to undergraduate research participants. Dr. Terry “Dr. Awesomeness” Nile was the recipient of the inaugural award, in recognition of an outstanding career teaching and mentoring students at UNCG.

The second recipient of this award was Dr. Jan Rychtář from the Department of Mathematics and Statistics. Dr. Rychtář joined the UNCG faculty in 2004 after earning a Ph.D. in Mathematics from the University of Alberta. His primary research interests include mathematical biology and game theory. Since 2005, he has organized the annual UNCG Regional Mathematics and Statistics Conference. He has authored or co-authored over 50 papers in peer-reviewed journals, 29 of which were with undergraduates; additionally, he has co-authored a book on game-theoretical models in biology. He has been PI on the two NSF UBM grants (2006-2009 and 2009-2013), an NSF REU grant (2014-2017), and co-PI on an NSF REU grant (2009-2012).

In 2008, Dr. Rychtář received a UNCG College of Arts and Sciences Teaching Excellence Award, and was later awarded a UNCG Junior Research Excellence Award in 2013 while serving as interim director of the UNCG Office of Undergraduate Research (now URSCO). During his career at UNCG he has supervised the research of over 40 undergraduate students. He is also an active councilor within the Mathematics & Computer Sciences Division of the Council on Undergraduate Research.