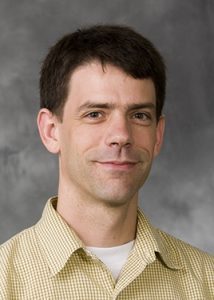 Dr. Olav Rueppell has earned numerous degrees, scholarships, fellowships and professorships during a career that has taken him across the globe, from Germany to Greensboro. Since coming to UNCG in 2003, Dr. Rueppell has been a force of nature in the Biology Department. He has taught courses ranging from introductory biology to the biology of aging, and led labs in such subjects as invertebrate zoology and entomology, among others. He is also the principal investigator of the UNCG Social Insect Lab, where he and a devoted group of student researchers use honey bees to study a wide range of biological questions concerning genetics, genomics, and social behavior.

Throughout his career, Dr. Rueppell has strived to balance conducting significant research with instructing the next generation of citizens and scientists; a balance that, for him, is not one of compromise but of true integration. He has done an outstanding job at this, notably in his work as a mentor for undergraduate researchers. Dr. Rueppell has mentored over 50 undergraduate students at UNCG, although his reach as a mentor extends far beyond the traditional borders of department and university. In addition to his exceptional work with undergraduates at UNCG, Dr. Rueppell has mentored scientists of all ages, from curious high schoolers to accomplished postdocs; he has even evaluated Ph.D. theses for students from other universities in disparate parts of the world. His students often say that Dr. Rueppell is an inspiration, leading by example with his tireless dedication to his work. One student remarked, “his diligence was a sort of fuel for the other members of the lab. We saw that his work ethic brought him success, so we followed suit.”

In his mentoring philosophy, Dr. Rueppell emphasizes student independence, believing that students benefit most when they step out of their comfort zones to experience that they can truly make a difference and be productive researchers. He wants his mentees to understand that their own motivation is a crucial part of every course and program. He encourages students to present work publically and often, in order to gain speaking experience and gather peer feedback, but is never pushy about this.

As a mentor, Dr. Rueppell functions as a support system, a guide, an advisor; he is a powerful example of what direction, passion, and dedication to research and science can accomplish. He uses his own path and principles as examples that help younger scientists find their own paths. He is challenging in his engagement, pushing his students to cultivate their critical thinking capacities and professionalism. But he also passionately inspires students to challenge themselves, and to become well-rounded, curious, and successful scientists. Dr. Rueppell manages to perfectly balance two major aspects of being an effective mentor: offering guidance, and promoting autonomy. His mentees say that he is always more than willing to meet one-on-one whenever they need to, but that he also encourages them to make their own mistakes, and to learn from them.

A student wrote of Dr. Rueppell, “all of the students that come into contact with him seem to thrive with a passion that he awakens within in them.” Those who have been lucky enough to have been mentored by Dr. Rueppell resoundingly agree that their time with him helped them become more confident in their research, and in themselves.

The Undergraduate Research, Scholarship and Creativity Office at UNCG established this award to recognize faculty members who engage students in projects that contribute to the expansion of knowledge and understanding in their discipline.

Dr. Olav Rueppell has managed to do this in exemplary fashion, and we are honored to present him with the Thomas Undergraduate Research Mentor Award for 2016.