UNCG represented at National Undergraduate Research Event for US Congress

GREENSBORO, NC, MAY 6, 2015- UNCG honors student, Tiffany Merritt, and her mentor, Dr. Saundra Westervelt of the Department of Sociology , took their research to Capitol Hill last week. Tiffany’s honors project, titled “Addressing the Aftermath of a Wrongful Conviction in North Carolina: Policy vs. Practice,” examines the implementation of the North Carolina compensation policy for NC exonerees. Tiffany’s research reveals that while NC is often noted as having a generous compensation statute for those wrongly convicted in our state, only 44% of NC exonerees actually receive compensation. Thus, her research reveals a gap between our policy and practice.

The project was one of 60 from across the country selected from over 500 applications for the annual “Posters on the Hill” event sponsored by the Council on Undergraduate Research. Merritt and Westervelt traveled to Washington, D.C. April 22-23, where they discussed their work with two U.S. Senators and the staffers for a third Senator and two U.S. Congressmen. They also met with White House staffers from the White House Office of Science and Technology Policy.

The Council on Undergraduate Research (CUR) is dedicated to supporting and promoting high-quality undergraduate student-faculty collaborative research and scholarship. CUR’s Posters on the Hill is a national showcase that emphasizes the impacts of undergraduate research experiences for the U.S. Congress. 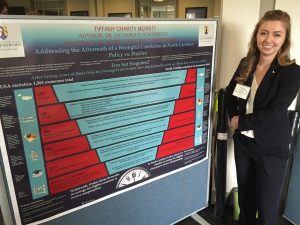 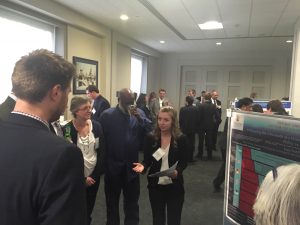 GREENSBORO, NC, May 4, 2015– This April has been a particularly demanding time for undergraduate researchers at UNCG. They started the month off with the 9th Annual Carolyn and Norwood Thomas Undergraduate Research & Creativity Expo (April 7th), travelled to academic conferences all over the US presenting their projects, and are wrapping up the month and semester with final exams. Congratulations, students, on another successful semester!

This past month, the Undergraduate Research, Scholarship, and Creativity Office has had the pleasure to fund nine students to travel to three different academic conferences in their discipline to promote their research and creative projects.

Below are the recipients of the URSCO travel awards for April 2015.

GREENSBORO, NC, APRIL 20, 2015- Dr. Sharon Morrison and Dr. Sudha Shreeniwas are excited to announce the success of a diverse and talented team of undergraduate researchers in HHS at UNCG, as well as from Guilford College (GC). Ten students, working in teams, recently had the opportunity to showcase their research at the 2015 Big South Undergraduate Research Symposium (BigSURS) which took place April 10-11, 2015 at Campbell University, NC. Two of the teams won “Best Poster Presentation” in their categories (Health Sciences and Public Health).

GREENSBORO, NC, APRIL 20, 2015- Undergraduate researcher Rolando Sanchez and his research mentor Dr. Roy Schwartzman have won the Joyce Ferguson Award for the top paper at the 2015 National Association of Communication Centers (NACC) conference held in Fredericksburg, VA. Their paper, titled “Communication Centers as Sites for Identity (Re)Negotiation,” was developed in Fall 2014 while Rolando worked as a Managing Consultant at the University Speaking Center. He graduated in December 2014 with a major in Communication Studies and a minor in Psychology. Rolando is now Group Project Coordinator at El Futuro Mental Health Clinic in Durham, NC. Roy Schwartzman is Professor and Lloyd International Honors College Fellow in the Department of Communication Studies. This is the third time Dr. Schwartzman has won the Ferguson Award from NACC, twice with undergraduate co-authors.

GREENSBORO, NC, March 30, 2015–March is known in college sports for its madness but March is also a demanding time in academia. March is the beginning of academic conference season. This past month, the Undergraduate Research, Scholarship, and Creativity Office has had the pleasure to fund five students to travel to six academic conferences in their discipline to promote their research and creative projects.

Below are the recipients of the URSCO travel awards for March 2015.

Interested in getting your conference travel funded? Read more about the URSCO Travel Awards HERE.

Dr. Lee Phillips, Director of the Undergraduate Research, Scholarship, and Creativity Office at UNCG, shares, “SNCURCS is a student-friendly forum designed to showcase a cross-section of undergraduate research, scholarship and creative inquiry from across the state. Students gain from having the opportunity to present results of their inquiry to a group of their peers, as well as faculty who attend. Presentation styles include posters, talks, and exhibits. Each presentation builds on the students’ ability to communicate technical information with confidence to a general audience. Students also get a chance to attend lunch-box sessions on topics ranging from getting into graduate school to applying for fellowships and international research experiences, to name a few. I look forward to SNCURCS each year and hope more UNCG students [and faculty] will take advantage of it in the future. Next year’s SNCURCS will be hosted by High Point University.”

Here is a list of the UNCG students & mentors that participated in the 2014 SNCURCS celebration of research, creativity and scholarship.